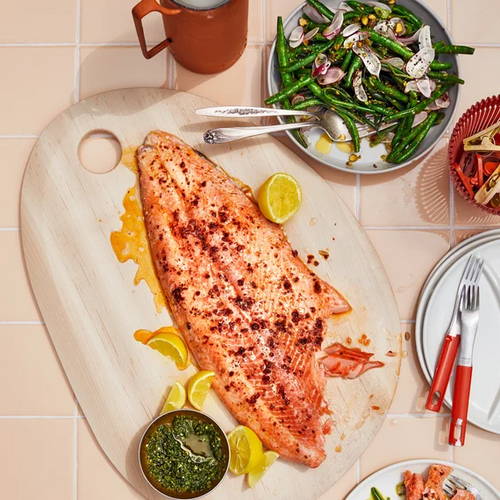 Here's what foods are allowed on the paleo diet—plus the most common mistakes people make when going paleo.

Contrary to conventional wisdom, the most common mistake people make when going paleo isn't missing the early morning Crossfit class (ha, ha!). But paleo is no joke: It may be a fad diet, but it's also a full-blown industry—it's got the books, blog, and products to prove it. There are about as many definitions of the word paleo as there are paleo dieters, but stripped down to brass tacks, a paleo diet excludes grains, dairy, sugar, beans, legumes, and processed foods—the focus is on healthy fats, meats, vegetables, and the occasional fruit for a sweet treat.

There are as many versions of the diet as there are dieters, but across the board are a few rules to keep in mind.

Here's what most people screw up when going paleo.

This is not Atkins, people. The point of paleo is not eating a boatload of meat. In fact, too much animal protein can have ill effects, including weight gain, says Jackie Newgent, RDN and culinary nutritionist. It's a misconception that runs deep. Michelle Tam of the blog and book Nom Nom Paleo says, "Everyone thinks all we eat is meat and fat, no veggies or carbs." Of course that's not true—that's a diet more appropriate for a Tyrannosaurus Rex. That said, most paleo dieters eat meat at least once a day, which is fine. The key is in limiting cuts high in saturated fats. Here's Newgent's advice: "Stick mainly with organic poultry and sustainable fish. If you choose red meat, keep it lean and preferably grass-fed, and choose it at no more than two or three meals a week. [Too much meat] also potentially increases chronic health risks such as heart disease."

Kenzie Swanhart, author of the cookbook Paleo in 28 IDs this as the biggest hurdle paleo dieters face in sticking with the diet. "When push comes to shove and it's three o'clock but you forgot to pack a healthy snack, that's when you revert to non-paleo approved foods," she says. It's a no-brainer to plan a week's worth of dinners, but don't forget about breakfast, lunch, and snacks. Swanhart brings raw vegetables, like carrot sticks and peppers, with guacamole to work. She's also a fan of homemade plantain chips and grain-free granola bars. You'll also have to consider how strict you want to be when dining out. Will you be okay ordering a steak that's been marinated with brown sugar? Can you get down with a salad dressing made with vegetable oil? Generally speaking, the more strictly you adhere to paleo rules, the fewer options you have.

A quick search on Pinterest reveals hundreds of "paleo-friendly" desserts. But, as Swanhart points out, "Just because you can make a paleo sweet treat doesn't mean you should eat a cup of maple syrup." Grains and refined sugar are not allowed on a paleo diet, but coconut sugar, maple, honey, and flour made from nuts is allowed—in moderation. Those adhering to a paleo diet should attempt to minimize foods that drastically change the structure of the ingredients (so, eat fresh coconut with abandon—limit coconut that's been dried and pulverized into a flour).

Both Tam and Swanhart rate the quality of the ingredients they buy as more important than making sure everything is 100% approved by the "paleo police." The farmers' market is a good starting point. "You can meet the farmer who grows your vegetables or raises your meat," she says. "It's not just buying a package of bacon sitting in the supermarket." Bacon's a perfect example of the varying degrees in quality: Salt and a little bit of sugar are necessary for curing, but pass on pork that has an ingredient label that reads like a science experiment (words like "sodium ascorbate" or "phosphates" are your clue).

"Since you won’t be getting protein from grains, beans, and dairy on a paleo plan, you’ll need to boost portions of meat or its equivalent as well as other paleo-friendly protein-packed foods," explains Newgent. "Paleo diet followers may need to eat eight to nine ounces of meat or its equivalent per day." Additionally, a paleo diet makes it challenging to get adequate vitamin D, calcium, and folate—these are all nutrients and vitamins found in grains, beans, legumes, and dairy—all paleo don'ts. "Any time a diet suggests eliminating healthful food categories, such as grains and beans, it’s absolutely a nutritional red flag!" she warns, and advises all those considering a paleo diet to meet with a registered dietician nutritionist to make themselves aware of the risks, and personalise a plan that meets their needs.

Most paleo bloggers and authors roll their eyes at any mention of the words "caveman" or "ancestral." "I'm not sleeping in the woods and killing my own food," says Tam. "It's more helpful to think about how your great-grandmother ate than how a caveman behaved. She was probably eating minimally-processed foods, sleeping well, and didn't have screen time." Ultimately, the paleo diet (and lifestyle) aims for fewer chemicals and preservatives, and less technology. The fact that Barney Rubble would be down with your food choices is mere coincidence. "The caveman is really just a mascot," says Tam. Although people have been eating paleo since, um, the stone age, the diet got a boost in popularity around 2002, when Dr. Loren Cordain wrote The Paleo Diet, a book aimed at helping Americans "lose weight and get healthy by eating the foods [they] were designed to eat."

Is it a miracle cure? Definitely not. Is it a healthy fit for some dieters? Certainly, when done right.