skip to content
7000+ reviews with an average 4.8 star rating

All our favourite desserts contain this one ingredient. 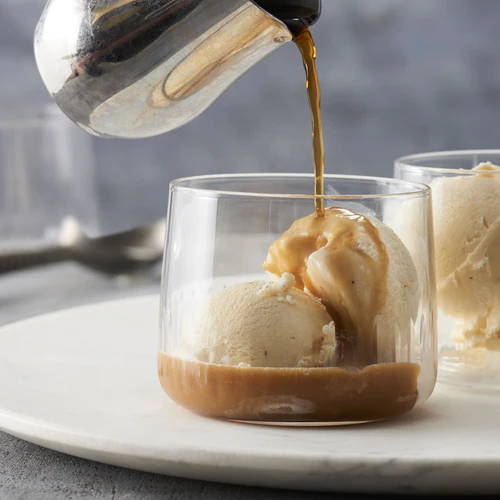 If the words rich, indulgent, and downright chocolatey appeal to you, then you’ll love every one of these nuut-pimped recipes. We have all the bases covered here. Use a really good quality ice-cream or gelato, and play with different liqueurs, like aged dark rum. Yum (hiccup).

1 or 2 scoops of chocolate gelato

Place one or two scoops of gelato in each coffee cup.

Spoon the espresso and liqueur over the top, scatter with nuut and serve immediately.

Experiment to get the right ratio of ice-cream to cup size, and to strike the right balance between hot and cold, bitter and sweet. The gelato's sweet richness should be balanced by the strength of the coffee, the deliciousness of the nuut, and the kick of the booze.

We serve this with a big dollop of dairy-free vanilla ice-cream.

Preheat oven to 375F (175C) and grease and flour a large Bundt pan or muffin tins.

In a separate mixing bowl, combine the oil, water, zucchini and vanilla. Add this to the dry ingredients, stirring until no traces of flour remain.

Pour into Bundt tin and bake for around an hour, or until the top is firm and the knife comes out with a couple of moist crumbs (not batter) when put through the middle of it (around 60 minutes). Leave to cool for 10 minutes, then run a knife around the outside and invert onto a plate. Leave the Bundt tin on top while it cools.

When cooled down, decorate with berries and serve with coconut yogurt or dairy-free ice-cream. Shave or grate dark chocolate on top and serve.

tastes just like the iconic flavour, but with a big dose of plant-based goodness.

450g pitted dates (if not moist, soak in warm water for 10 mins and drain)

place a large mixing bowl in the freezer to chill for 10 minutes.

in the meantime, add moist, pitted dates to a food processor and blitz until small bits remain. then add hot water a little at a time until it forms a thick paste. set aside.

without tipping the cans, scoop out the coconut cream from the cans of coconut cream, reserving the clear liquid for other uses. place in chilled mixing bowl.

using a mixer, whip until creamy and smooth. then add nuut, vanilla, almond milk, and half of the date paste. whip until fully incorporated.

taste and adjust flavours as needed. add nuts and fudge and stir to combine.

transfer mixture to a parchment-lined freezer-safe container and cover loosely with plastic wrap, then foil to help freeze.

you can take this out in a couple of hours for a chilled mousse-like ice cream. freeze overnight for a firmer ice cream.

set out for at least 20 minutes prior to scooping, and use a scoop warmed under hot water for a proper scoop.

keeps in the freezer for up to one week, but best when fresh. just as addictive as the original. just better for you.

1 scoop nuut (any blend you wish)

place nuts in a food processor and blend until smooth.

put in nutribullet and blend, adding rest of coconut oil as required until smooth.

stir in pinch of sea salt to taste.

store in a glass jar in the fridge.