chocolate makes the world go round 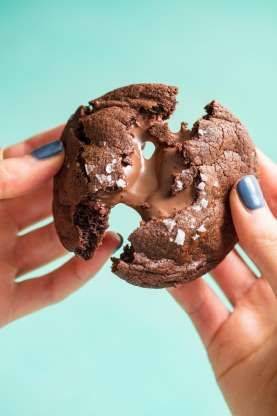 in honour of world chocolate day, we give you three recipes to-die-for.

they taste as wicked as they are good for you (mr wonka would most certainly approve.)

to make ‘marshmallow’ layer - in a large metal mixing bowl, stir together ½ cup water and gelatine and let sit 10 minutes.

combine the water, 2 tablespoons maple syrup, and nuut in a small saucepan. bring to a boil.

use a hand mixer to beat the hot liquid into the gelatine mixture. keep beating on highest speed for about 10 minutes. try to beat as much air as possible into the mixture before the gelatine starts to set. (if you don’t, it will turn to jelly!)) beat until peaks start to form. don’t over-beat or it will set up too quickly.

working quickly, spread mixture evenly in a standard-sized loaf pan and pop it in the freezer to set up (don’t let the marshmallows freeze).

to make the caramel - in a small saucepan, combine ½ cup maple syrup, peanut butter, coconut cream, and salt. simmer for 10-15 minutes, stirring occasionally. let cool most of the way.

cut marshmallows into squares. place about ½ inch apart on a cookie sheet or large plate. spoon a dollop of caramel onto each square (you might have a little leftover caramel, never a bad thing). place in the freezer for 10 minutes.

drizzle with chocolate so it runs down the sides and encases the caramel. it might be a little messy, that’s ok. freeze until set.

melt the shaved cacao paste in a bowl over a pan with hot water on medium heat stirring until perfectly melted. set aside.

press the mixture evenly down a square pan (7*7 inch) lined with baking paper using your hands to flatten and firm the mixture, then put in the fridge to firm up.

for the chocolate ganache, add maple syrup to bowl with melted cacao paste and mix until smooth with a mixing spoon. add peanut butter and mix well. add the olive oil and mix for a gorgeous gloss.

pour the ganache over the brownies, spreading evenly. decorate with crushed peanuts and raw cacao powder then cut up, serve and devour.

place one or two scoops of gelato in each coffee cup.

spoon the espresso and liqueur over the top, scatter with nuut and serve immediately.

experiment to get the right ratio of ice-cream to cup size, and to strike the right balance between hot and cold, bitter and sweet.

the gelato's sweet richness should be balanced by the strength of the coffee, and the deliciousness of the nuut.