i went to a nutritionist and it changed my life. 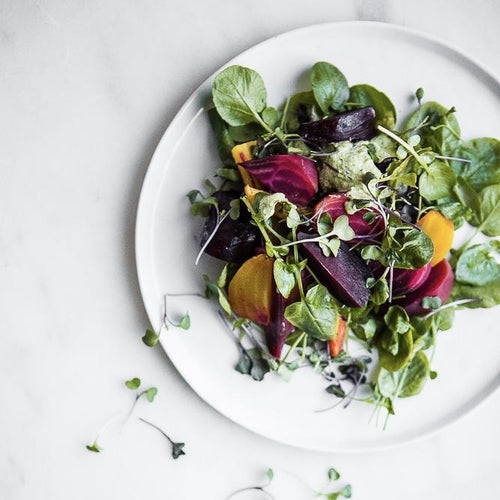 Until six months ago, breakfast was a cappuccino, inhaled as I ran to the Tube. Now, my morning starts very differently. On rising, I wash down my daily ration of omega-3 capsules and vitamin supplements with a glass of room-temperature water. Then I blend organic frozen berries, half a banana, a spoonful of ground-up dried seaweed and a serving of chia seeds into a smoothie (it tastes much better than it sounds). After that, it’s time for a short work-out of stretches, planks, arm circles and Pilates moves before I shower and dress.

Had I been told that I would ever embrace this Hollywood-sounding regime, I would have laughed in disbelief. I am not only sceptical, but have three children and a dog to organise before I go to work.

The seismic alteration in my lifestyle is down to the emotionally intelligent approach of the nutritionist Karen Cummings-Palmer. We first met at a dinner party, and I remember being struck not only by her appearance – she looked at least a decade younger than her actual age – but also by the fact that she enjoyed her supper and washed it down with a glass of wine. 'I believe in tools, not rules,’ she told me. "My clients can be pretty rock 'n’ roll – they like to travel, to stay up late, to drink… I explain to them: if you want to carry on partying, you have to make tweaks to your lifestyle. It isn’t about punishing yourself, it’s about creating balance." As that was something I found in short supply in my own life, where I typically alternated between puritanism and excess, I signed myself up.

Cummings-Palmer aims to build healthy rituals into her clients' routine, and so she asked me to keep a food diary for several weeks. My daily habit of eating cheese out of the fridge when I got home was first to be addressed: it was causing my skin to flare up, she said. I was to swap my favourite Camembert for goat or sheep cheese; then, once I’d made the switch, to cut back my consumption to weekends only.

Next, she tackled breakfast. Having established that I had little time or inclination to eat in the mornings – why take on calories when you aren’t hungry? – she suggested the smoothie as a quick, light and easy way to ensure my skin got the requisite nutrients. "You need to feed your face!" she explained. At first, I resisted; now, it’s automatic for me to stagger bleary-eyed to my Vitamix blender every morning.

Each time we met, another ritual was built in. There were supplements to take, and a silk pillowcase to use, because it's softer on hair and skin. She worked on my face with a Ziip, a device that sends tiny electric currents through the epidermis to stimulate the cells to produce collagen and elastin; I was so impressed I got one for myself and committed to a session on Sunday evenings. We added a gentle exercise routine every morning, which I carried out in my pyjamas, and without breaking a sweat ("You don’t want to raise your cortisol levels").

Far from being a radical transformation, most of these changes were easy to assimilate. This, says Cummings-Palmer, is the whole point: "All that really matters is what you do on a daily basis."

So some days, I walked to work; on other days, I went to the gym, swam or did a Pilates class – it didn’t matter what I did, as long as I moved. And over the ensuing weeks, I dropped almost a stone without really noticing it, while my skin became tauter and brighter.

As the party season loomed, I worried that I would have to curtail my enjoyment, but Cummings-Palmer offered helpful psychological short-cuts to cope. "Think of alcohol as dessert," she advised. "If you’re going to have it, choose exactly what you want, and enjoy it." (She always opts for red wine, because of its resveratrol content.) "But stop after one glass – you’d never have more than one pudding, after all."

When faced with a tray of canapés, she suggested I avoid anything I could eat with my fingers, since it would probably involve pastry. "Choose canapés served in a bowl or a spoon," she says. "And if you’re having a great time, just enjoy yourself. Going to a party may not be good for your health, but it is good for your soul." A holistic view of nutrition that even cynics like me can get behind.

The Most Beautiful Chocolatey-Breakfast Bowls Ever