when it comes to taste, what matters more: our mouth or our minds? 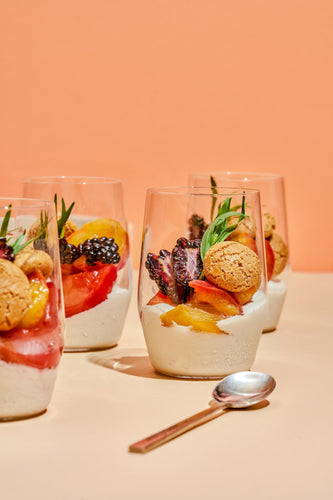 we know we love to eat—what we don't know is why and how. So we rounded up cultural and scientific observations about the psychology—and physiology—of taste.

We're all familiar with Marcel Proust's humble madeleine. The mere scent of the buttery cookie sends a wave of nostalgia through the narrator of In Search of Lost Time, rendering it impossible for him to think of anything but his aunt's old madeleine and lime-flower tea routine. Proust exalts said cookie, placing it on a tea-soaked pedestal oozing with fondness and familiarity. But let's be honest: Madeleines ain't Cronuts. Sure, some may be transporting, but a good many more are dry and unsatisfying. So, how can we be sure that Proust's madeleines deserved his praise? Were they truly excellent, or was the man deluded by vivid memories?

To answer that, let’s revisit the issue of nature versus nurture. In other words: Was Proust conditioned to like madeleines solely as a result of his childhood experience, or did the combination of sugar and butter trigger his salivatory glands, revving him up for a feeding frenzy? And, on a deeper level, what does this mean for everyone else? When it comes to our palates, what matters more: Our mouths or our minds? Luckily, this is a question scientists have been studying in various ways for years, so we hit the books to look at their research.

It's undeniable that the way we process flavours is influenced by physiology—but how much so?

Let's start by taking a look at where it all begins: in the womb. The food that pregnant mothers eat affects what kids like once they're born, according to a study done by the Monell Chemical Senses Center, a non-profit that investigates the intersection between taste and smell. Apparently, the food consumed actually flavours the amniotic fluid surrounding the fetus, so: Eat kale, your future child tastes kale. There has been, though, some debate about how flavour is truly transmitted to the fetus; the Monell Center found that only sweet—not bitter—tastes were passed along to developing babies. So... you eat Twinkies, your kid loves Twinkies?

Now, once we're old enough to assert our opinions but not yet old enough to make our own food choices, things begin to get a little hairy. While there may be a behavioural component to a child's vehement refusal of, say, green vegetables, consider this: According to an article in The Guardian, kids have more tastebuds than adults (about 30,000, in comparison to our 10,000), so foods that seem perfectly spicy to you may be crazy-hot to them, "slightly bitter" registers as "totally disgusting," and so on and so forth. That's not to say there's no hope for the veggie-averse child. You can physically train yourself to like a bitter food by cutting it with a little sugar, then progressively eliminating the sweetener. (Some folks practice this method into adulthood—it's how some of us learned to drink coffee black.) But wait, why don't we naturally gravitate toward bitter foods? Our palates may also actually be a lot smarter than we realised: There's proof that sensitivity to bitter tastes is driven by natural selection—bitter flavours have traditionally acted as a red light, indicating poisons or toxins.

That said, once we mature, we may forever be battling our bodies for a better palate. Those with a higher amount of pain fibre clusters on their tongues experience flavours like salt, fat, and sugar more intensely—they're called supertasters. Supertasters can also better perceive textural aspects of food, like creaminess and mouthfeel. They tend to love salt and (yikes) have a higher risk of colon cancer because they don't eat as many vegetables as they should—although they also tend to be slimmer because they aren't so easily tempted by sweet desserts. Curious about your tasting ability? The type and size of tastebuds on your tongue may help identify whether or not you're a supertaster (if you're a mouse, anyway).

Unfortunately, once we defeat the odds and grow to love black coffee and chicken livers, we begin a slow downhill battle: Because so much of our taste is reliant on the sense of smell, and our sense of smell deteriorates with age, it becomes harder to detect the nuances of flavour in our old favourites. We actually also lose taste buds as we grow older, so, desperate for a hit of flavour, the older among us are more likely to reach for foods that pack a powerful one-two punch, like processed chips.

Whether you like a certain dish or not, how you perceive it depends on whether you first smell it through your nose or your mouth (yep, we definitely smell through our mouths). That's why food just tastes bland when you have a cold or are battling allergies; with a stuffy nose, you've lost one of the best parts of your palate.

it's all in our heads

On the other side of the camp, there's plenty of proof that how we approach food is psychological. A "bad experience" with a food (like drinking too much wine, not that we'd know anything about that) can make it seem unpalatable and "off." In other words, we convince ourselves that it's a food to be avoided—until the next happy hour, at least.

But even if you think you hate a certain flavour or food, you can probably train yourself to like it—through studious effort, no sugar required. There's a whole camp of coriander-averse people, for example, who claim the herb tastes soapy. It's been believed this this is due to the eater's genetic makeup, but as neuroscientist (and former cilantro hater) Jay Gottfried explained in a New York Times column by Harold McGee, he learned to enjoy the herb by willingly eating it: "I ate all kinds of things, and I kept encountering it. My brain must have developed new patterns for coriander flavour from those experiences.”

Aesthetics and status are important, too: A study that doctored the same clear soft drink with different colours demonstrated that our perception of flavour is drastically affected by colour cues (see red, think berry; see clear, think citrus—regardless of the actual flavour). Knowing the ingredients in what you're about to consume makes a difference in how you feel about it, too—the author of a study at MIT, for example, explained that his mother used to peg cod liver oil as "syrup."

But what about foods we keep coming back to? Food writer Josh Ozersky asserts that our fond memories of food can entice us to eat things that are actually sorely lacking in flavour (e.g., Twinkies). "There’s nothing wrong with nostalgia done right," he writes, "and one of the pleasures of eating as an adult comes from the sentimental associations we have from our childhoods." Proust would no doubt agree.

And yes, we're a little susceptible to peer pressure, according to a 1989 New York Times article: We tend to acquire cravings for food that society tells us we should be eating, and claim we dislike the ones that are "bad" for us. Granted, the piece is a little dated (it asserts that "Consumption of high-energy complex carbohydrates in the form of pasta and grains has increased significantly," which is decidedly no longer in line with the gluten- and carb-averse world of 2014). But some of the basic tenets of the piece hold true, such as the fact that "People's likes are influenced by what they think is valued by people they respect." Jessica Biel goes paleo, we go paleo?

On a more quotidian level, even your choice of cutlery affects your perception of taste. Yogurt, for example, tastes "more expensive" when eaten with a plastic spoon, found a 2013 study by the journal Flavour. The issue here, oddly enough, isn't so much the material used as the weight of the spoon; lighter utensils yielded more positive results with diners. (Also, blue spoons made the yogurt taste "saltier.") Additionally, research presented earlier this year shows dropping more money on a meal will make it taste better—we tend to perceive a higher price tag as indicative of better quality, even if it's not. An extravagantly named dish is likely to taste better than the same meal with an ordinary name. Puréed legume and fruit compote panino, anyone?

And here's a consideration that we took particular interest in: A study from Brigham Young University found that looking at Instagram food photos before mealtime—or during mealtime (We're animals! We can't stop!)—made the actual act of eating less satisfying. The study's co-author, Ryan Elder, explains: "It's sensory boredom—you've kind of moved on. You don't want that taste experience anymore." Happily, though, you need to look at a "decent number" of food shots to feel the effects, so maybe taking a gander once or twice throughout the day won't hurt…

maybe it's a little of both.

All that said, we think that physiology and psychology work together to complete a full picture about the way we taste. Let's bring it back to Proust. Say his aunt's madeleines were expertly made, moist and light, tender with a gentle crumb. Say Marcel ate them heartily, and as he did, his body (perhaps conditioned from a mother's diet of sweet cream and baked goods, though of course we're just speculating) signalled that these energy-dense treats were a smart choice. Say eating those perfect madeleines also just made him feel loved and cared for, and that created an even stronger positive reinforcement for the treat. So next time (and the time after that, and the one after that), he encounters a madeleine, *both his body and his brain are begging for a bite—*and even if that bite was of a dry, substandard madeleine, he responds with outsize joy. Because, lucky for him, Instagram hadn't been invented yet.

So, while the response may be the immediate result of a physical factor (the body), it rounds out as a strong nostalgic reaction (the mind). Because let's face it—the sugar in that chocolate chip cookie may give us a pleasant jolt of energy and rev our salivary glands, but it just always tastes better if it came from Mum's—or Auntie's—kitchen.